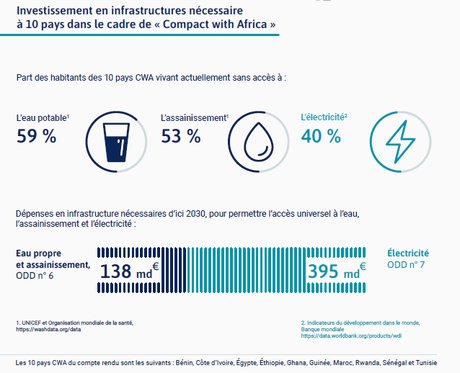 It is expected that only US $ 1.4 trillion will be delivered based on current spending levels. This represents an investment gap of 42%, one of the largest regional differences in the world.

A gap of 1000 billion dollars of investments to be filled
Moreover, on the investment deficit of $ 1000 billion, $ 415 billion will be needed by 2030 if these countries want to achieve the United Nations Sustainable Development Goals (SDGs) for universal access to water drinking water, sanitation and electricity. The second “Outlook” report provides – for the first time – the magnitude of infrastructure investment needs, current investment trends and corresponding investment spreads in 10 Pact countries with Africa at the global level. countries and sectors. He noted, however, that emerging markets remain attractive for investors.

“The key to solving this problem is to create the right environment to encourage investors to turn their interest into action,” he added.