Presentation of Talenteum and one of its co-founders: Nicolas Goldstein
TALENTEUM is a web platform that invests in human capital in Africa and remotely intervenes on behalf of companies around the world.

Mainly via teleworking or remote work. One of the co-founders is Nicolas Goldstein, expert in outsourcing for 15 years and well involved in the Ecosystem of NICT * in Mauritius representing StartupGrind Google.

The best way to curb migration flows is not to close the borders but to help the countries where the migrants come from.

It is helping these countries develop and be independent in the labor market.

To do this, TALENTEUM.africa helps to improve the employability of its members by giving them access to a variety of training, continuing and / or diploma, sources of increased matching between their skills and the operational needs of companies around the world.

It contributes to the reduction of underemployment in Africa, while providing a response to the emerging talent crisis in the rest of the world.

How?
By creating a community of the best talents in Africa, remotely intervening from their homes or a business center.

You can consult their workforce on their site to get an idea of ​​it, the range of trades it includes is wide:

Computer engineers including some, specialized in Artificial Intelligence
Web experts
Commercial agents
jurists
accountants
TALENTEUM’s vision is that Africa is not only the cradle of the world: it is also the future!

Telecommuting
Telework refers to a particular organization of work, that is to say the exercise of a professional activity, in whole or in part at a distance (outside the place where the result of the work is expected, generally the premises of his employer) through information and communication technologies (Internet, mobile telephony, fax, etc.).

It can be carried out from the home, a telecentre, a satellite office or nomadically (different workplaces depending on the activity to be performed), in the context of salaried work, but also from shared spaces (coworking), in the framework of independent telework. “Mobile telework” has been encouraged by economic globalization.

The major asset of Africa: its youth
With 60% of its population under 35 years of age, half of whom are unemployed, Africa has a young, well-educated and ambitious population with little added value from companies in the rest of the world.

One out of every two graduates who leave hundreds of African universities each year does not find work in his specialty, or tries his luck in Europe where economies and populations are less and less welcoming.

However, the world is facing a growing shortage of skilled labor in fields as diverse as IT, accounting, finance, telecoms, marketing, sales …

This web platform acts as a real panafrican agency for training and job offers.

It gives its members the means to evolve and thrive in an increasingly open and international labor market.

Promising future prospects
Indeed, thanks to the advent of new information technologies, Africa can come back on the scene very quickly and in the most noble way possible: thanks to the intellectual capacities of its youth and not only thanks to its mineral resources as if it were only a gigantic warehouse where the whole world comes to serve without any consideration for its inhabitants.

The future looks bright, just work and organize in a better way leaving aside the patterns of exploitation used in previous centuries. 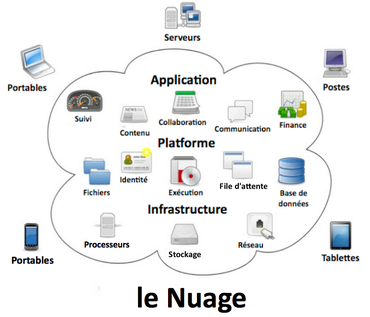 Schematic overview of the major components of Information and Communication Technologies (ICTs), and cloud computing as emerging in the early 2000s.

The legal and regulatory texts use the phrase: “electronic communications. ”

We thank you for your attention and recommend other articles on the subject if you wish to know more: