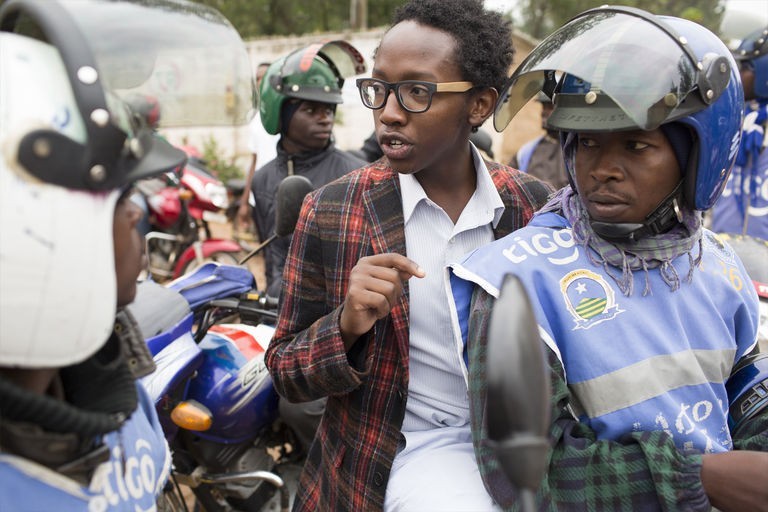 SafeMotos, the start-up that wants to “uberize” motorbikes in Africa

“Don’t get killed today. At SafeMotos, the anxiety-provoking slogan, posted on the wall, contrasts with a most relaxed, almost Californian atmosphere. Here, we relax from a game of ping-pong or dart, we whistle a tune of jazz in front of our laptop. The offices of the start-up do not dominate the skyline of San Francisco, but the hills of Kigali.

Launched in June 2015, the application has already earned its nickname “Uber of motorcycle taxis”, allowing residents of the Rwandan capital to order impeccable drivers from their laptops for a year. SafeMotos has 5,000 regular users. In a few months, the application has been downloaded 10,000 times and counts 28,000 journeys.

At the origin of the project, there are two young men, Barrett Nash and Peter Kariuki (Canadian and Kenyan nationality), but also a crash. A few months after germinating the idea of ​​their start-up, the two friends took a motorbike taxi for a trip to Kigali. Suddenly, a pick-up appears. The road is slippery. The two friends and their drivers crash on the sides of the truck. A fright for Barrett, a few broken teeth for Peter. But one thing is certain: motorcycle taxis are dangerous.

The success of SafeMotos therefore rests firstly on a rigorous control of the conduct of drivers. They sign a contract, which the company can end at any time. He must have his license (of course) but also a quality helmet and a reflective jacket. “If he can’t buy all of that, you can open up a microcredit for him,” says Barrett Nash.

On their dashboards, SafeMotos teams control the activity of their drivers, rated from 0 to 100 depending on the quality of their driving. Each profile is accompanied by graphics and maps, showing journey times, retracing each journey. “We check the bikes every week,” said Herve Munyurangeri, one of the young Rwandan developers of the application. We have a yellow card and red card system to remind drivers to order if they drive too badly. In one year, only one biker was fired, and we only had one accident. “

Safe Motos technology impresses, making it possible to trace to the second the accelerations of an overly rushed driver. “It’s pretty simple,” laughs Peter Kariuki. SafeMotos uses a combination of already existing software and applications. “With OpenStreetMap, we know exactly what the streets look like, their lengths, the different crossings. With the GPS, you can follow each driver in his journeys. And we also have access to the speed limits set by the government for each lane. By crossing the data, thanks to an algorithm, we can therefore know how long the driver takes to travel on such a street and at what speed, and determine if he went too fast, if he braked too suddenly … ”

A highway of 600,000 km of data has been accumulated in one year. No more hailing mopeds! The app uses the same principle as Uber. You just need to download it and report its position on a map to invite a motorcycle taxi. “The waiting time is less than five minutes,” we are told. We tested it: after several blockages, a driver was finally assigned to us … with twenty minutes of waiting.

A heresy in a city where you just have to raise your hand at any time to stop a motorcycle. Because SafeMotos remains a drop of water in a motorized ocean: in Kigali, it is indeed quite rare to come across the little red flag of the drivers of the application, hung on the front of the bike. In the Rwandan capital, there are 10 to 15,000 motorbike taxis making 200,000 journeys per day, compared to just 350 daily trips for the 70 SafeMotos drivers.

SafeMotos however puts an end to the traditional negotiation of the price of the motorcycle taxi. As with Uber, it is set automatically based on distance and travel time. You can pay in cash, or with an electronic wallet, debited for each journey. “The market price is 100 Rwandan francs per kilometer [11 cents],” explains Barrett Nash. We charge 105 francs. 85 are donated to the driver and we therefore make 20 francs profit per journey [just over two cents] ”. With 350 journeys a day, that’s roughly seven euros in daily profit… SafeMotos is far from profitable.

Is Kigali the right city to develop such an application? The driving of Kenyan and Ugandan boda boda is much more dangerous than that of Kigali motorcycles, where vehicles are registered, traffic is less congested and deviations are less frequent. “It is first of all an application for foreigners who disembark here and are afraid of taking a motorcycle,” jokes a resident of the capital. The majority of SafeMotos users, we are assured, would however be Rwandans. “In any case, 80% of the accidents here involve motorcycles,” insists Barrett Nash. There is a right to feel safe no matter where you live. ”

Rwanda would have all the qualities necessary for the development of a start-up. There is no corruption here. “The tax policy is clear, nobody is going to steal our baby, explains Barrett Nash. In addition, the infrastructure is of better quality. The authorities support us because they think we have value. »A sometimes heavy check? “They want results. It may be less free than in Kenya, but you wouldn’t find this support anywhere else. ”

Will Kigali chip in Nairobi, Lagos or Johannesburg the coveted place of capital of African start-ups? Rwanda has been ranked number one country in Africa for doing business by the World Bank. In May, Kigali hosted the 26th World Economic Forum (WEF), on the promising theme of “digital transformation”. Facebook, Google and Microsoft were there. Kigali is not on its test ball thanks to the kLab, an incubator born in 2011, and the FabLab, its cousin launched last May.

All these efforts, in a country where 80% of the population is employed by the agricultural sector and barely a quarter has access to electricity, remain to be put into perspective. The fact remains that eight out of ten Rwandans have access to a laptop – and therefore to SafeMotos. The start-up, which targets 1,000 daily journeys, is already looking further ahead. A similar application exists in Uganda. “This principle is completely duplicable on other continents, in Southeast Asia for example,” insists Barret Nash. If we stay in Kigali, it will be a failure. ”
Learn more at http://www.lemonde.fr/afrique/article/2016/08/12/safemotos-la-start-up-qui-veut-uberiser-les-motos-taxis-d-afrique_4981941_3212.html# GFIbQ0L6ZwAvQ3vM.99