We must welcome the publication of this third installment of the young collection “Cahiers du CIAN *”, whose theme is entirely contained in the title: “The African diasporas, accelerators of the economies of the continent.” The book appears indeed at the right moment, in a context favorable to a new glance focused on Africa as on its diasporas, these representing, according to the Charter of the African Union, the “sixth region of the Continent”, and especially men and women who can help meet the many and pressing challenges facing Africa.

One of the first merits of the book is to sketch the unseen portrait of today’s diaspora. Even if it is far from homogeneous, it nevertheless shares some strong characteristics: Afro-descendants born in France are now more numerous than their parents from Africa; the political demands of post-independence diaspora associations have largely given way to economic ambition, a frequent marker of the new generation; the desire to return, once pregnant, is today counterbalanced by that of dual membership, which tends to replace the “double absence” often felt by the generation of the ancients.

Another significant feature: this diaspora has become a major contributor to the economies of the continent where it sends from 55 to 70 billion dollars a year – according to official estimates, and therefore in fact much more – including 5.7 billion from France .
Remittances have thus become an essential source of financing for many African economies, surpassing the amounts of official development assistance and sometimes contributing up to 20% of the Gross Domestic Product of the countries concerned. Multiplied by ten in thirty years, remittances from the African diaspora now represent, according to UNCED, 51% of private capital flows on the continent.

The “diasporants” of France
more and more enterprising
These “diasporants” – as the authors of the book call them, the journalists Bénédicte Châtel and Anne Guillaume-Gentil – among whom are several strong personalities known for their success as entrepreneurs (we will not mention any, because they are too numerous to be all cited), have thus become a subject of growing interest for all those who advocate for a renewed economic cooperation with Africa: fora and symposia where they are heard to testify their experience have multiplied since the first initiative, the National Day [ annual] of African diasporas, created and conducted in 2013 (when France begins to consider migration as a component of development policy) by Pierre De Gaetan Njikam, Deputy Mayor of Bordeaux Alain Juppé, in charge of Cooperation with sub-Saharan Africa; and until June 2018, with the big Forum of Diasporas, at the Palais des Congrès in Paris (of which our website has reported so much HERE).

This proactive environment is conducive to encourage the many diasporants in France who take initiatives for Africa: “The specificity in France compared to the rest of Europe is to have a large diaspora, structured and active, in the direction of countries of origin. We are the only country to have so many associations, “says Olivier Kaba, project manager Migrations at the French Development Agency (AFD), quoted by the authors.

Several of these initiatives, quite recent, are particularly aimed at channeling surplus diaspora supplies into African productive investment, since current transfers are mainly used for the subsistence needs of families.

Indeed, as the authors point out, funds specifically intended for the financing of African companies have been created (IPAE funds 1 and 2 of I & P, led by Jean-Michel Severino, the crowdfunding platform Afrikwity, created by Thameur Hemdane …), or their creation is in the process of being finalized (EAF Club Efficience Fund, chaired by Élie Nkamgueu) … 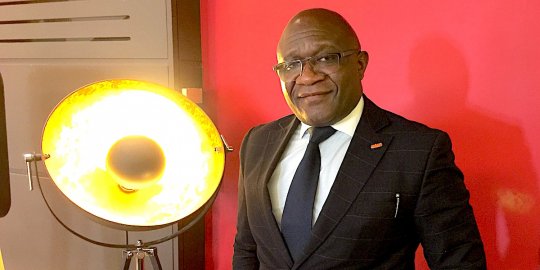 Élie Nkamgueu, president of the Efficiency Club and initiator of the EAF fund, an essential personality of the “black Gotha” of France. © AM / AP.P

Presidential political will and mobilization
public and private actors
All this proliferation of initiatives is also confirmed, since 2017, by the will of President Emmanuel Macron repeatedly to rebuild a more “partnership” with the Continent, in order to “link Africa to Europe”. through the Mediterranean “(see Emmanuel Macron’s speech in Ouagadougou, recent speech by the” Mr. Africa “of the Elysée Franck Paris, in front of the Medef Africa, creation of the Presidential Council for Africa, etc.).

A vision that finds concrete expression in the presidential commitment to raise to 0.55% of gross national income the official development aid, and the allocation of additional lines of credit to the French Development Agency (AFD) of which half of the resources (€ 5.2bn out of a total of € 10.4bn in 2017) are already mobilized for Africa, AFD has also since 2016 been the executive mandate of the 2018 Action Plan -2022 support for diaspora initiatives.

The private sector is not left out: investors from CIAN, the French Council of investors in Africa (see our interview with Étienne Giros, president delegate) and entrepreneurs Medef Africa (see the recent speech of President Patrice Fonlladosa) including , show a growing voluntarism towards the Continent, not to mention the various associative initiatives: recent, such as that of the RICE (Rassemblement international des Congolais de l’exterior), which wants to lower the cost of money transfers to the world. Africa by developing an alternative service, cheaper, to that of the current Western Union-MoneyGram duopoly … and other initiatives already, already inscribed in the long time of the action, such as those developed by the CADE association ( Coordination for the Africa of tomorrow) for some thirty years, and whose next meeting, dedicated to the themes of water and sanitation in Africa and the Mediterranean will be held in Paris on February 11th.

Thus mentioned, the French context – and not only Paris-Ile-de-France, it is another merit of the book that to let us know the initiatives taken in Lyon, Bordeaux, Marseille and Brittany – in which the diasporants move look very rich with opportunities to seize, in step with the immense opportunities for economic growth in Africa since the early 2000s.

But the countries of origin are not so … welcoming! “Apart from the very original case of Morocco, explain the authors, who very early in the 1970s, measured the importance of the stake, making his” Moroccans of the World “the thirteenth province of the Kingdom, s’ relying on them as accelerators of the changes underway in Morocco, few African countries develop policies, or at least a positioning, in relation to their diasporas. (Senegal, Cameroon, Ghana, or very recent, since only 2017: Ivory Coast, Nigeria, Burkina Faso, Congo, Algeria).

The exemplary case of Morocco with regard to its diaspora
The diaspora of “Moroccans of the World” (MDM), we learn in this third installment of Cahiers du CIAN, represents 10% of the population of the Kingdom and, between 2000 and 2011, operated “financial transfers representing an average of 8% GDP, covering almost 50% of the trade deficit, representing 5 times the ODA and 2.5 times the FDI over the period “(Sources IRES, Royal Institute for Strategic Studies, 2013).

Thus, in the 1990s, Morocco committed itself to “strengthening its ties with its diaspora” by creating three dedicated entities: one to maintain strong ties with Moroccan residents abroad (MRE of Morocco). time, name now replaced by MDM) and help them in case of difficulties; an Advisory Board to monitor and evaluate ad hoc policies; a supervisory ministry to ensure the implementation of these.

At the same time, the deployment of Moroccan banks in the host countries was carried out, as well as “the structuring of private sector business networks”, like the Morocco Entrepreneurs Association (currently led by a very involved duo). , President Bouchra Bayed and Secretary General Karim Basrire), very active in France to help young Moroccans to start their own business (the next event of Maroc Entrepreneurs, “The Day of Business Creation”, will be held in Paris, February 9). 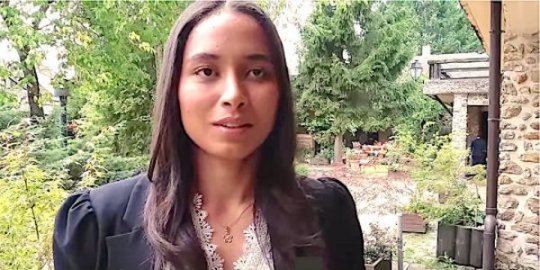 Bouchra Bayed, president of Maroc Entrepreneurs, an association established in Paris and helping young Moroccans in the diaspora, or students in France, to start their own business. © DR

The philosophy that inspires Morocco’s action, says Karim Basrire, quoted in the book, is “the idea that the diaspora can be an accelerator of the changes underway in Morocco [who] understood that the world is mobility. The subject “we return, we do not return” is exceeded. Today, where you are, you can contribute. ”

The Moroccan Employers’ Confederation (CGEM) is on the same line: it has created a platform (in test) for MDM entrepreneurs to exchange, while becoming members of the CGEM, wherever they are in the world.

Better still, funds specifically intended to support the Moroccan entrepreneurs’ entrepreneurs were created, like the MDM Invest fund, quoted in the book and mentioned at the Paris Diaspora Forum, on June 22, 2018, by Hicham. Zanati Serghini, General Manager of the Central Guarantee Fund of Morocco (CCG): “Our MDM Invest Fund is a co-financing tool between a bank and the CGC for the benefit of MDMs wishing to invest [and undertake] in Morocco. This fund also opens the door to several benefits, such as the investment bonus, which reaches 10% of the total amount. The fund invests up to 2 million euros in a project – we have just placed 2 million in a dental start-up – but the “small” projects are not disdained [because] they are important because of their impact on the project. local employment. ”

Étienne GIROS, Deputy Chairman of CIAN: “On the role
diasporas, we are experiencing an awakening 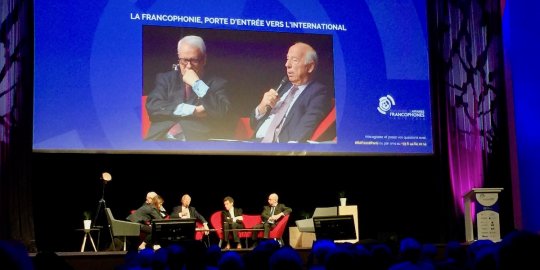 Founding President of AfricSearch and a great figure of the diaspora of entrepreneurs, Didier Acouetey evokes this question of “reception in countries of return” [ed] in the conclusion of the book. Admittedly, he recognizes the success of rare countries in their return incentive policies – Morocco, Ghana, Nigeria, according to him – but he points to “the disorganization of the diasporas (…), the failure of most African states to create the conditions of their diaspora (…) the structural frameworks that are lacking “.

As relevant as it may be, this statement by the enumeration of the gaps, placed at the end of the book, risks, however, leaving the reader with a taste of bitterness. Perhaps – and this will be the only peer review addressed to the authors of this rich book – it would have been better to have in fine the best examples of good practices for the reception of diasporas on return, and particularly that of Morocco, which seems to date the most advanced. Simply because the know-how of some can inspire the action of others, tomorrow. And because to persist, to root and inspire more powerfully, Afro-optimism also needs to be nurtured consistently.

That said, this third “Cahier du CIAN” has the great merit of presenting an “in action” and hitherto unpublished panorama of African diasporas in France, and highlighting their importance: “On the role diasporas, we are experiencing an awareness and a profound and definitive evolution of states of mind, said Étienne Giros, delegate president of CIAN, who signs the preface of the book. It remains to transform them into realities and practical achievements, for the development of Africa. The French private sector, and the CIAN in particular, is ready to play its part. This book is the testimony. ”

A testimony and a strong invitation, just a few days from the Africa Forum 2019 MOCI and CIAN (February 8, at the ICC of Paris) so that we are always more likely to look at Africa with the eyes of the future. Because the destinies of our two continents are irreversibly linked.

* The Cahiers du CIAN
This collection is created by the French Council of Investors in Africa (CIAN), which has more than 160 member companies invested on the continent and achieving 80% of the French business volume in Africa (60 billion euros).
Describing the major developments in Africa, the Cahiers du CIAN aims to participate in the public debate. Their ambition is to strengthen knowledge and confidence in the Africa of tomorrow.
Two notebooks were published previously: “The digital in Africa, the five digital jumps” (Jean-Michel Huet, Michel Lafon, 2017) and “The new African pact. The challenges of public-private dialogue “(Jean-Luc Ricci and Patrick Sevaistre, Michel Lafon, 2017.