Born in 1960 in Somaliland, residing in London, Ismail Ahmed is the founder and boss of the startup WorldRemit, specializing in money transfer to Africa. Since his childhood, he knows the importance of these transfers for the economy of the continent.

“In the 1970s and 1980s, many Somalis were going to work in the Gulf countries where there was a kind of gold rush. This was the case of my brother and my brother-in-law who went to Saudi Arabia, “says Ismail Ahmed. The money earned was then sent to families.

Families often very poor. The founder of WorldRemit lived in the city but was “partially raised in the countryside” where he experienced “the difficult living conditions” of a rural poor. “I was particularly busy with camels,” he recalls, laughing.

An underestimated magnitude
He does all his schooling in his country. In 1988, a civil war broke out that would lead three years later to the (unrecognized) independence of Somaliland, which broke away from Somalia (and of which it is officially a province). The capital, Hargeisa, is bombed and Ismail has to take refuge in Djibouti. He left for London where he studied economics. Despite his scholarship, he has to do “temporary jobs” to live and send money to his family in Ethiopia.

This period allows him to become familiar with another aspect of money transfer. “I had to make important trips to go to a specialized agency. You had to wait in line for hours. And then, transfer times were long and expensive, “he recalls.

He acquired a solid experience in this sector of activity. It is therefore almost naturally that he will make his profession. In 1995, he was recruited by Sussex University to research this field of activity. “I then measured the extent of financial transfers to Somaliland, initially very underestimated. We thought they were $ 5 million. In fact, we discovered that they reached 500 million! ”

A money from the diaspora vital for millions of people. And who “helped them rebuild their lives after the war. Today, it accounts for some 40% of GDP, “thinks the entrepreneur.

Corruption
These discoveries are of interest to the United Nations Development Program (UNDP). In 2005, he suggested that the researcher work for him in Nairobi, Kenya. But Ismail Ahmed will meet … corruption. “I witnessed a lot of irregularities and fraudulent practices, especially among the officials who managed the project and the private consultants who accompanied them,” he explained in 2017 at the Huffpostmaghreb website.

At the same time, Kofi Annan, then Secretary-General of the UN, promises the organization’s staff that there will be a “zero tolerance” in the fight against corruption. In 2006, taking him at his word, Ismail Ahmed discreetly denounces the facts at the headquarters of the international organization in New York.

Then begins a fantastic adventure. “Investigators then came from the United States to Nairobi, not to investigate, but to cover those responsible for the case! The money transfer specialist is responsible … to help identify the whistleblower. Who is none other than himself! “I was thus given access to protected documents, to thousands of emails. Which allows him to complete his file …

A file that he sends to his hierarchy. And that he intends to send to the UN Ethics Committee in New York. The researcher is warned that if he continues in this direction, he will never “have the opportunity to work in the sector”. But he perseveres. “I lost my friends then,” he adds. As well as his job. He decides to confide in a Reuters journalist.

He returns to London where he resumes studies at the London School of Business. In parallel, he begins to work on a project that will lead to the foundation of WorldRemit. Four years later, in 2010, the UN Ethics Committee allocated him 200,000 pounds (228,000 euros). A boon that allows him to launch his company. 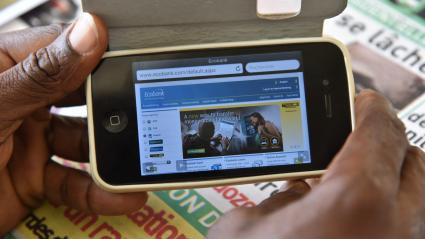 A man consults his bank account from his smartphone on April 24, 2015 in Abidjan (Ivory Coast) (SIA KAMBOU / AFP)

Mobile money
In less than 10 years, WorldRemit has “reduced the cost of transfers and broke the monopoly of the big ones in the sector,” like the American Western Union and MoneyGram, told franceinfo in July 2018 that the co-founder of the startup, Catherine Wines. If Africa is its main market, the company has expanded its network around the world. Origin of its success: technology. In this case the use of mobile wallet (mobile money) from a cell phone. Employing today 750 employees, WorldRemit has achieved in 2018 a turnover of some 90 million pounds, up 50% year-on-year.

Ismail Ahmed sees only benefits to mobile money. “In Somaliland, it is very developed. We accept it everywhere. No one wants cash, “he says. African governments “see the benefits. Thanks to new technologies, we have been able to renew the traditional way of distributing money “. Important for Africa where just over 30% of people have a bank account, says Catherine Wines.

As a result, it helps to respond more quickly to scourges like the drought that has plagued East Africa in recent years. And led to food shortages. “We were able to send money quickly to the affected areas. That was impossible in the past, “notes the boss of WorldRemit. 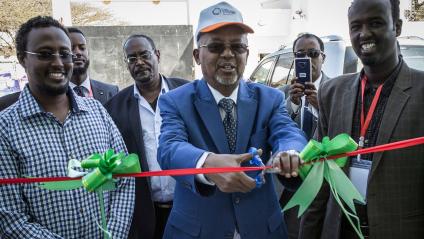 A model ?
Beyond, does he consider himself a model for young Africans? It tempers. ” I was lucky. Obviously, I had challenges to overcome. But given my background, it’s not impossible to do what I did. ”

And how does the British businessman of Somalilandese background evolve the economic situation of Africa? “I’m very optimistic,” he says. “It’s true, there are still many challenges ahead. But things are getting better, “he thinks.

“There are a lot of entrepreneurs on the continent. And there is only to see the success of technology firms. Also see how much a country like Kenya, where I was recently, has evolved. But in the Horn of Africa, we talk more about Shebabs and what’s happening in Mogadishu, than events in Somaliland! Ismail Ahmed continues.