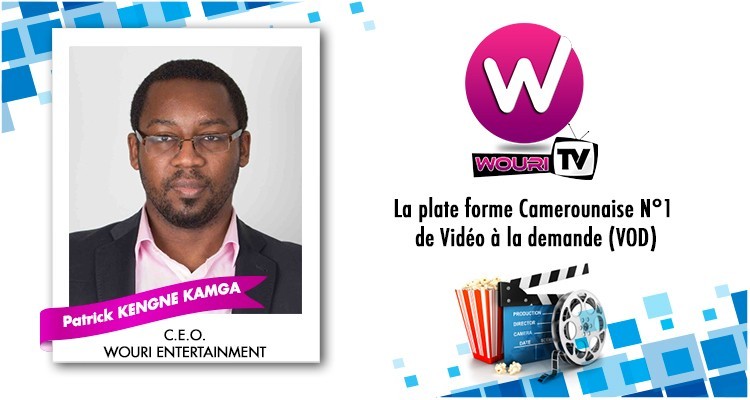 Founded in 2016 by Paulette Fotsing and Patrick Kengne Kamga Wouri Entertainment is a company specializing in the African film industry. This Cameroonian company tries through its platform to increase the visibility of African cinema. “The initial idea came from the following observation: contrary to what we can commonly think, Africans know how to make good films. There is not only Hollywood or NovelasTV … The concern is that in the vast majority of countries, movie theaters have been closed for several years … “.

Introduce yourself and your background (briefly)

First of all, thank you AfrikaTech for this platform that you offer me to present the company WOURI ENTERTAINMENT.

I am Patrick Kengne Kamga, I am 34 years old and come from Cameroon where I made the first part of my studies, with the key a Scientific Baccalaureate.

Then to France in 2002, with the bonus in 2008 an engineering degree at Telecom ParisTech, the reference school in the digital in France.

I then started my professional career at EDF (Electricité de France), in piloting IT projects and Telecom, then recently (2017) in projects for electrification of rural areas in Africa (Deployment of solar kits in Côte d ‘ Ivory and Ghana). I was able to succeed this transition (Telecom to energy) after 1 year in Specialized Master at CentraleSupélec

I am since 2016, in parallel with my activities at EDF the CEO and co-founder of WOURI ENTERTAINMENT.

What is your project and its mission?

WOURI ENTERTAINMENT is a company founded in 2016, specializing in the African film industry.

It focuses on 3 missions:

– Production and co-production (Films Series) and co-production (In other words, any African producer or director who wants support for his project can appeal to WOURI)
– Broadcasting (via its VOD platform (Web and Mobile App) to promote African cinema via the internet channel, a channel that reaches the greatest number.
– Distribution (sale of broadcasting rights to TV channels, pan-African channels in particular). In other words, any African producer who wants to sell his films or series to TV channels can be represented by WOURI

How did you get the idea to start your business?

The initial idea came from the following observation: contrary to what we can commonly think, Africans know how to make good films. There is not only Hollywood or NovelasTV … The concern is that in the vast majority of countries, movie theaters are closed for several years (although we note a return with the entrepreneur BOLORRE and the Canal Olympia in Africa). We were convinced of it, but it was necessary to prove it, to mount it. What’s better than a web platform to reach as many people as possible

Can you introduce your team?

We are 2 co-founders: Paulette Fotsing (DG, in charge of productions) and myself (President, in charge of strategy and development),

What is the problem solved by WOURI ENTERTAINMENT?

I will say two main issues:

Additional source of profitability for producers (not only does VOD allow it, but the other entity of the company (Distribution) complements this profitability because we sign broadcast agreements with TV channels)
Increased visibility of the works produced, because the Internet is the most popular medium
What is the Business Model of WOURI ENTERTAINMENT?

The BP is quite simple: Revenue Sharing with producers who entrust us with their videos to broadcast on our platform or via sales to TV channels.

What are the next steps ?

Once the pilot concluded in Cameroon, we think of an expansion in other African countries (CIV, Senegal …)

What do you need and how can AfrikaTech help you?

Mainly a broadcast of the interview.

What are the contacts of the startup? Website, email, Mobile / WhatsApp, links to social networks?