New from Vairified. After revolutionizing urban transport in Douala, the Cameroonian startup is extending its ropes with a brand new project, this time in agribusiness. In partnership with AgroPro, Vairified is launching into organic.
Ordering fruit and vegetables produced as naturally as possible via a mobile application is the new service offered by Vairified to Cameroonian consumers. In partnership with AgroPro, a national distributor of agricultural equipment and input products, the Douala-based startup is launching Vairified BIO, its founder and CEO, Patrick Ehode, announced to La Tribune Afrique. 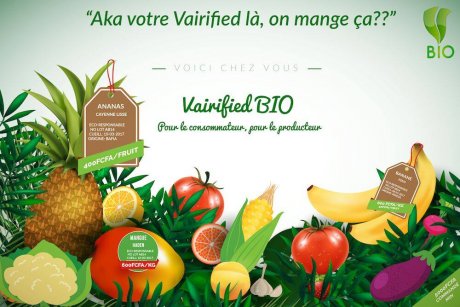 Public health and upgrading of the small farmer
This is therefore on a whole different level that this company is embarking on, which has been making headlines since last year thanks to its revolutionary “Taxi Vairified” secure urban transport project. For Mr. Ehode, this new project has a dual objective. First, respond to a public health problem by offering healthy agricultural products.

“As much as we can say that Africa is famine, we can say that Africa is natural. But the two assertions are not necessarily true. In our cities, the issue of chronic diseases is increasingly raised. People die of stroke at 35, cancer, … The main cause of these diseases comes from food. It shows that our agriculture is not that healthy, ”he explains.

The other objective of Vairified is to restore the profession of peasant farmer as done for the Taximen. “Today Taximen are proud of their profession, the labeling has given them back their value. This is what we want to do for the small farmers who are weakened by the intensive agriculture advocated by governments “, explains the young boss. “Our project aims to preserve these small farmers by differentiating their products from others,” he adds.

Orders will be placed through a mobile app, but there will be no news. They will be done via the Taxi Vairified application which many Cameroonian users already have on their mobile phones. “We have implemented a chatbot within the app that will allow people to order while conversing,” says Ehode. For him, this is a way for the startup to adapt to the high tech habits of Cameroonians. “We realized that Africans in general and Cameroonians in particular like to chat, discuss. Many have discovered the internet through the phone, so people love to text each other. This is why we have set up these conversational robots which, let us remember, are currently the cutting edge of technology, “he argues.

In practice, the products will have labeling that identifies the origin of the product, while guaranteeing their environmental responsibility (eco responsible). Consumers will be able to order fruits and vegetables from 5,000 Fcfa and be delivered after a maximum of two days throughout the country. According to the startup, its prices are adapted to those practiced in the main roads and show “20 to 25%” less compared to the prices prevailing in the big cities.

Vairified BIO is thus following in the footsteps of other Cameroonian companies that have embarked on organic, in this case the popular Biotropical. But unlike the latter, which is much more invested in exports, Vairified Bio intends, for the time being anyway, to serve the local market.