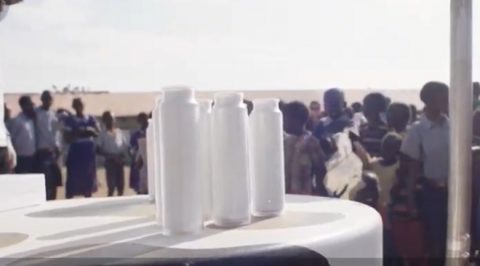 South Korean startup Yolk has received a 2019 innovation award for its solar cow. The fruit of a partnership with a Kenyan school, it could eventually encourage strongly the schooling of African children. This while increasing access to electricity for parents.

The solar cow project is actually based on a cow-shaped charging station that uses solar energy to replenish energy. This construction, highly acclaimed in Las Vegas, could strengthen schooling in Africa in a fun way for children. The idea is at first to install in African schools. Then, the schoolchildren will all receive a portable battery in the shape of a bottle of milk, the “Power Milk”. When they get to school, they will connect it to the solar cow, and then recharge it all day long. They will be able to leave school with a battery full of energy.

A bottle of milk that would be all the rage
According to the startup’s researchers, “these Power Milks have enough capacity to meet most of the electricity needs of an average household: charging laptops, powering a flashlight, a radio, or other gadgets.” Therefore, by sending their children to school, families will be able to save up to 20% of their average monthly income, according to the Yolk team.

This innovation is all the more useful because it is very difficult to recharge energy in certain rural areas of Africa. In Kenya’s Pokot school, which served as the basis for the project, the solar cow saved between four and six hours of daily travel to the charging station. The implementation of the “solar cow project” would therefore have a double benefit. On the one hand, it would allow African families to access energy more simply and cheaply. On the other hand, it would encourage them more than ever to send their children to school, which would reduce child labor and increase their chances of progressing in life.

This innovation may have had some resonance via a show on France Inter, so we hope from the bottom of the heart that some companies will encourage its deployment. We imagine that the laughing cow or Milka could afford a very good image via sponsorship involving these cows 2.0.

Be that as it may, it is very positive to see how some companies are getting involved in supporting schools in developing countries. In February 2018, for example, Tesla installed Powerwalls to ventilate schools in Tahiti.