With the collaboration of Dr Jean Marc Ndombo 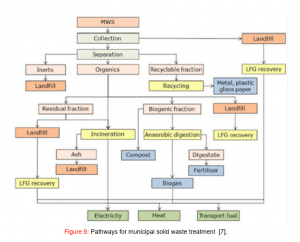 Landfilling involves the controlled and managed disposal of waste such as untreated or treated municipal solid waste, construction and demolition waste, industrial waste, etc.into a hole in the ground. Landfill gas, which is composed of mainly methane and carbon dioxide, is derived from the biodegradation of the organic fraction of the waste. The amount of landfill gas produced would depend on the type of waste placed in the landfill. Biodegradable wastes such as sewage sludge and the biodegradable fraction of municipal solid waste, generate high concentrations of landfill gas. Where a sufficient amount of landfill gas is generated, it would be collected and flared or used to produce energy. Although regarded as the lowest option in the hierarchy of waste management, there is an increasing emphasis on minimising the environmental impact of waste landfills increasing the legislative control and monitoring of leachate and landfill gas [11].

Incineration of waste is suitable as a waste treatment option, depending on the category of waste and mainly applies to waste that is combustible such as municipal solid waste, some hazardous waste, clinical waste and some industrial waste. Incineration is the most widespread option for the treatment of solid wastes after landfill. Incineration involves little pre-treatment prior to combustion. In Europe, municipal solid waste is incinerated in large-scale, mass-burn incinerators, which typically have throughputs of 50,000-400,000 tonnes per year. However, there is great public opposition to waste incineration mainly because of the emissions it generates. Of particular concern are the emissions of dioxins and furans, heavy metals and acid gases. However, the incineration industry, particularly in Western Europe, is highly regulated and subject to stringent emissions control [11]. Thermal treatment via pyrolysis and/or gasification techniques is receiving increased attention as an option for MSW and other combustible waste.

Composting is an aerobic treatment process which makes use of microorganisms to breakdown the segregated biodegradable organic fraction of waste (such as in MSW) to carbon dioxide and water and to produce a residue suitable as a soil conditioner in agriculture, land reclamation or horticulture [11].

Another treatment option for municipal solid waste include anaerobic digestion, which is carried out on the segregated biodegradable fraction of municipal solid waste under anaerobic conditions in a sealed vessel. The process produces a gas composed of methane and carbon dioxide and a residue suitable for agricultural and horticultural use, similar to compost.