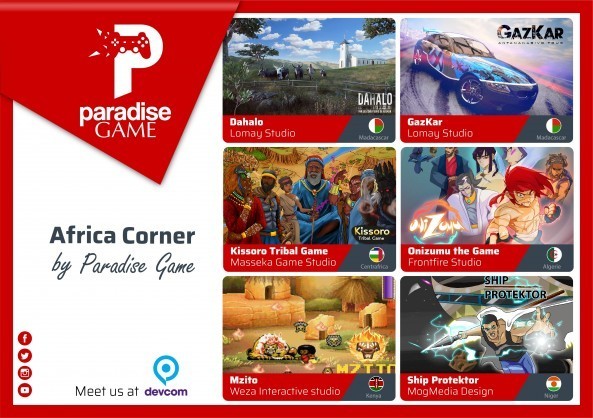 On the occasion of ten years of gamescom, the largest European video game show, several African creators will participate in Devcom, the conference of independent developers to be held on 19 and 20 August 2018 in Cologne, Germany.

There are five independent studios of different origins and backgrounds that will make the trip. These include MASSEKA GAME STUDIO representing the Central African Republic, the STUDIO LOMAY of Madagascar, the studio MOG MEDIA DESIGN of Niger, the studio WEZA INTERACTIVE of Kenya, and the studio FRONTFIRE of Algeria.

The African developers will gather in the “Africa Corner by Paradise Game” at the east wing of Koelnmesse. This space dedicated to video games “made in Africa” will give them the opportunity to present their creations to industry professionals and showcase their culture.

Sidick Bakayoko, CEO and founder of Paradise Game, said, “Our dream is to make video games one of Africa’s economic growth drivers, and one of the continent’s biggest job providers. For this we need a strong ecosystem with game developers who export internationally. ”

The video game industry in the world accounts for almost $ 100 billion and 27% of this revenue comes from mobile gaming. Africa has enormous potential, with nearly 500 million mobile phone users.

Video games offer business opportunities for African developers, and opportunities for youth looking for work. The video game is also a new tool for promoting African culture. Paradise Game has therefore given itself the mission to create a Made-in-Africa label; the challenge is therefore important.