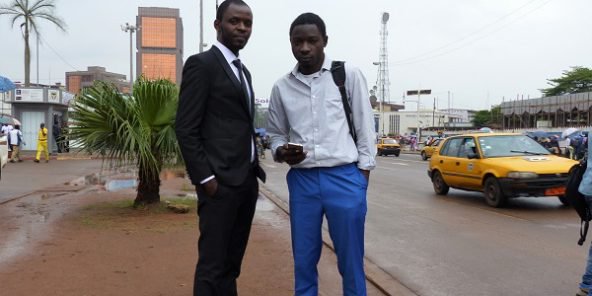 Start-up of the week: in Cameroon, the Traveler application for road safety

In Cameroon, road accidents kill more than malaria. It is by making this observation that Achiri Arnold Nji, a young Cameroonian developer, and his team have made a bet: create a mobile application to improve the road safety of their country.

This Wednesday afternoon, the ballet of cars and the concert horns are in full swing on the boulevard of 20 May in downtown Yaounde. Impeccable suit-tie and smartphone in hand, Achiri Arnold Nji, a 27-year-old entrepreneur, is making his way through the anarchy of the Cameroonian capital.

He made the trip from Buea, 300 kilometers away in the South West region where the start-up he co-founded and directs, to present his latest creation to the Ministry of Transport, several travel agencies.

Its technology, called “Traveler”, is a platform and mobile application that allows to monitor the conduct of bus drivers remotely and in real time. The goal is to improve road safety in a country where road crashes kill more than malaria, according to the World Health Organization.

According to his estimates, more than 20,000 people were killed on the road between 2010 and 2015. “80% of road accidents in Cameroon are due to speeding. The roads, often in poor condition, and the dilapidated vehicles are also involved, “says Achiri Arnold Nji, a graduate in electrical engineering from the Polytechnic University of Yaounde.

Control the speed and abnormal movements
“The idea of ​​creating Traveler came to me a few years ago after a bus accident in Bamenda (North-West). 20 people died, among which was a friend. I went to the scene of the disaster, it was horrible. I remember the blood, screams, my friend was literally cut in three … “says the young anglophone native of this county town of the North West region of Cameroon.

The young man, traumatized, then decides to work with several friends on a new technology that can predict and anticipate road accidents. The platform, which operates through a GPS system and data collection and analysis, allows to control live speed of a vehicle, but also its trajectory, accelerations or abnormal stops. Passengers can report any dangerous driving or breakdown via their smartphone. In case of an accident, the system automatically alerts emergencies and relatives of victims.

It also serves as a “black box” by recording all the information necessary to establish the circumstances of the disaster. “Here is the app, it’s very simple: you enter the starting point of the bus and your destination. Then the journey can begin, we will see in real time the speed and the trajectory to which we move, “shows Akah Harvey Larry, a 25-year-old computer engineer who co-founded the company and designed the platform.

“We have developed prediction algorithms, which work with the data collected during the trip, to predict collision risks. In case of danger, the driver is immediately alerted by phone, “says Harvey Harvey Larry.

The mobile application, free and available on Android, has already been downloaded more than 5,000 times and 500 vehicles are registered. “Five tourist agencies also use the professional version of Traveler,” adds Achiri Arnold Nji.

For Achiri and his team of engineers – there are six in total – it all started as a “bet” when they decided to embark on the “Traveler” adventure two years ago. But, little by little, the group of young graduates just graduates wins many distinctions in Europe and Africa: the Orange award of the social entrepreneur in 2017, the African Entrepreneurship Award in 2016, they arrive finalists at the grand prize of the SMExchange innovation in 2015.

An “indispensable” application, according to the Cameroonian Transport Directorate
Their app quickly seduces the world of “tech” to the Cameroonian government, which is enthusiastic: “This platform is not only beneficial, it is essential for our country. We need this kind of technological initiative and young people like them, motivated and inventive, to propose solutions to fight against the insecurity on the roads in Cameroon “, supports the director of the road transport Divine Mbamone – even if the concrete help from the government is waiting for now.

The small group uses the various endowments obtained via these awards ($ 113,000, or € 92,300, until then) to finance the development of the young start-up. “We also have our families behind us, they believed in our project from the beginning and helped us invest,” says Achiri Arnold Nji. The family of Achiri Arnold Nji has thus invested 11 million CFA francs in the company, while that of Akah Harvey Larry has contributed 4 million to the launch of the start-up.

Today, the young company, with a capital of 49 million CFA francs, has a turnover of 400,000 CFA francs. But not enough to despair his entrepreneur who is confident: “We should generate 75 million CFA francs in the year 2018 thanks to the data collected. The express tourist bus company has planned to invest 450,000 F CFA in two years in our application. With all this, we hope to reach balance by the month of June, “he explains.

Administrative slowness and internet cuts
Achiri Arnold Nji wants to go fast. But the negotiations with the Ministry of Transport are getting bogged down. “Too slow,” “frustrating,” he criticizes. Not to mention the many Internet cuts in Silicon Mountain, nickname given to Buea, in the English-speaking region hit by the crisis for several months. “It was a real challenge,” he admits when he recalls their debut.

Faced with the problems of internet connection in the country, the developers had to adapt: ​​”Traveler can work offline. It then uses the last recorded data and when internet connectivity is restored, it automatically synchronizes them with the server. We have developed one of the first offline emergency systems for passenger assistance, “he says.

On his seventh visit to the Ministry of Transport, the young man is hoping for a contract with the government and tourism agencies to impose the use of Traveler on all professionals. The price of the license, set at 200,000 CFA francs (about 300 euros), remains at the heart of the negotiations.

“The bus companies are all very interested, but I think they are still chilly because this platform, which would detect the dangerous driving and speeding of their own drivers, worried them,” says Achiri Arnold Nji.

For the team of young developers, every return to the capital – six hours of bus per trip – is an opportunity to test and improve the application. “The axis Douala-Yaoundé, through which we pass, is one of the deadliest roads in the world,” says the young entrepreneur, before taking a brisk step towards the ministry. Last selfie in front of the official building, then the band of friends rushes, pressed, in the dilapidated corridors towards the meeting room, ready for negotiation.