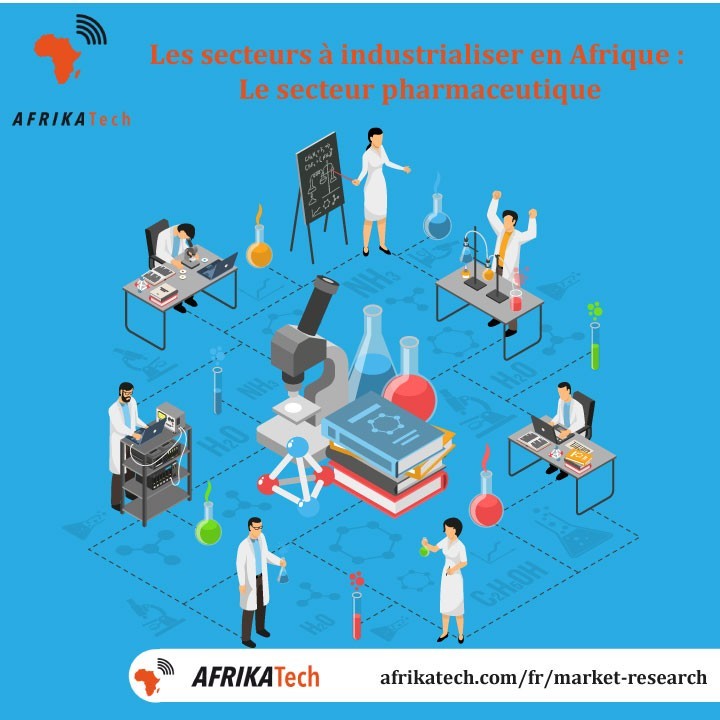 Sectors to industrialize in Africa: The pharmaceutical sector

Africa is a continent with great potential. Whether human or economic, the possibilities seem endless, given what is important to do. The hatching of this potential goes through several “revolutions”, including industrialization. However, this cannot be done at “360 degrees”, all sectors simultaneously. Priority should be given to certain sectors. After the food industry, let’s explore the pharmaceutical sector in Africa, which contributes to improving / maintaining the quality of human life.

The demand for pharmaceuticals is growing and Africa seems unable to take advantage of or stimulate the expansion of this sector in order to meet this demand.

The pharmaceutical industry in Africa remains in an embryonic state. Only 3% of the world production of medicines comes from the African continent. This mainly comes from some “hubs” or “pharmerging”. Global drug production therefore suffers from a great disparity.

Even within the continent, a “cleavage” can be observed. While countries like South Africa and Morocco manage to meet between 70% and 80% of their own pharmaceutical needs, Central Africa seems to be struggling. Almost 99% of the drugs circulating there are imported from abroad, especially from Asia. This is not without posing several problems:

the high costs associated with transportation irreparably increase the final price of drugs;
the supply of stocks is dependent on sometimes very long delivery times
the risk of developing counterfeit or lower quality products on local markets is increasing.

The quality of the drugs in question

The question of the quality of medicines is a vital issue. The establishment of parallel supply chains, aided by the fragmentation of distribution chains, and the proliferation of counterfeit medicines, of lower quality, or even totally ineffective, are a real scourge.

In some African countries, it seems very complicated for local producers to implement good manufacturing practices (GMP), guaranteeing the quality of production.

Industrializing this sector would allow the provision of health products in line with the needs of populations, at affordable prices and in sufficient numbers, with the guarantee of a high level of quality and efficiency, which could, in the same wake and naturally be supported by effective distribution networks.

Concerted actions to stimulate the movement?

One of the responses to the accessibility of the drug on the African continent is the development of production capacities on a regional scale. Beyond the production of drugs, It seems essential that a synergy takes place between private actors, development financial institutions and public authorities.

Development finance institutions are expected to support a move upmarket in quality standards applied by African producers, including through technical assistance.

Acting on the supply and distribution chains of medicines would reduce the excessive number of intermediaries, from the “wholesale distributor” to the pharmacy.

In addition, each intermediary adds their margin, which can represent up to 50% of the price paid by the consumer in Kenya and up to 90% of the price in less advanced and landlocked countries, against 2% to 24% for countries of the OECD.

This makes drugs sold in sub-Saharan Africa the most expensive drugs in the world. In addition, a very fragmented supply chain is undoubtedly an aggravating factor in counterfeit medicines. Almost 42% of reports of fake medicines received by WHO since 2013 are believed to come from Africa.

The support of the institutions mentioned above, for the benefit of public and private actors in the African pharmaceutical system therefore seems essential to change the situation and consolidate the pharmaceutical supply chain.

Private investment also has a role to play. LeapFrog Investments has invested in Goodlife Pharmacy, a retail pharmacy chain that today reaches over 600,000 consumers at more than 20 locations in East Africa. The capital brought to Goodlife by LeapFrog will allow the chain to deploy, in the coming years, an ambitious expansion strategy in Kenya and beyond, which should contribute to the emergence of a major player in the pharmaceutical sector in Africa, outside the usual networks made up of hundreds of small distributors.

Industrialization of the pharmaceutical sector in Africa would therefore require substantial support from national and international investors, public and private. The sector could therefore benefit from targeted investments, allowing good control of stocks and the establishment of a traceability system in order to guarantee the quality of the products sold to the patient, a prerequisite.

In the future, the use of innovative technological solutions could also evolve the sector’s business model and identify market leaders. In sub-Saharan Africa, those who can recognize the market potential and act quickly will not only reap the financial benefits; they will also help save millions of lives.

In the meantime, Africans are simply using countermeasures to combat counterfeit medicines, such as the startup MPedigree in Ghana, which has already listed more than 500 million boxes of medicines. MPedigree lets you know if a medication is true or false, simply by sending the identification code of the medication by text.